One of the project's goals is "make Android port". Since "Mupen64Plus, Android Edition" is based on "Mupen64Plus v2.0",  I have to port my plugin to Mupen64Plus v2.0 first. Today my very incomplete and probably incorrect port started to work. This port took much more of my time than the previous port to Mupen64. Undefined references, missing exports etc. Nevertheless, it works now. New step to the goal is done. 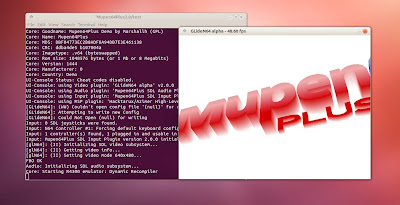 Frame buffer emulation is a set of techniques, which developer of hardware-rendering graphics plugin uses to emulate manipulations with color and depth buffer areas on the real console. This is one of the most important and hardest to implement part of the plugin. It is important, because many games uses manipulations with the buffers and will not work correct without it. It is hard because it is necessary somehow substitute the buffers in console memory by the content of frame buffer in PC video card. This is the introduction topic, where I will show you variety of ways of manipulations with color buffers used by N64 programmers to implement special effects.


The main frame buffer is the one we see on the TV screen. It has RGB format and screen size. The most obvious use of main color buffer content is as background texture. It is often used for pause screens: 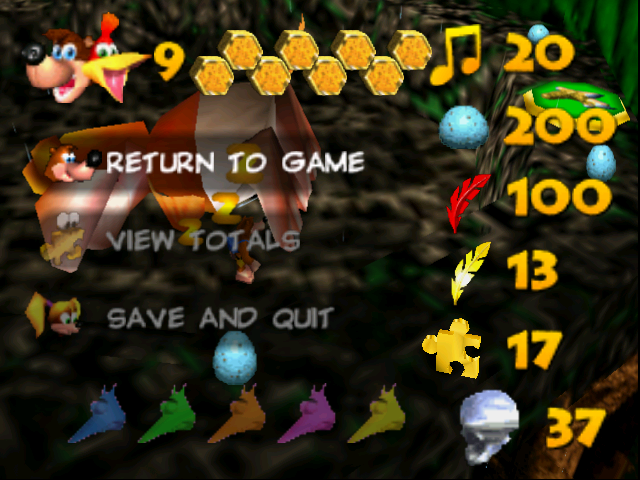 Consequent main frames can be blended with each other to get motion blur effect: 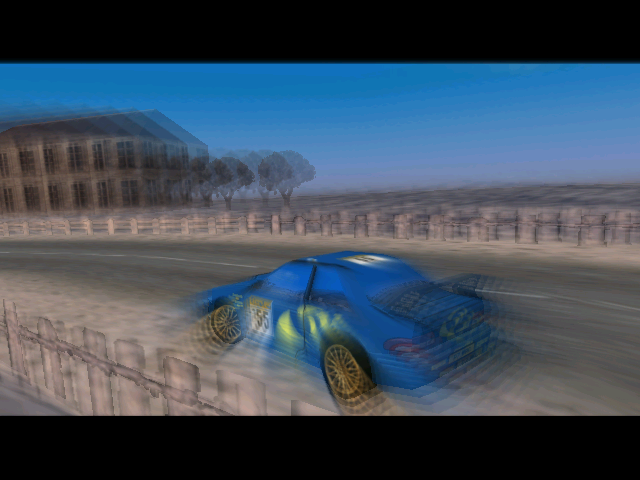 Main buffer texture can be deformed or manipulated to get special effects: 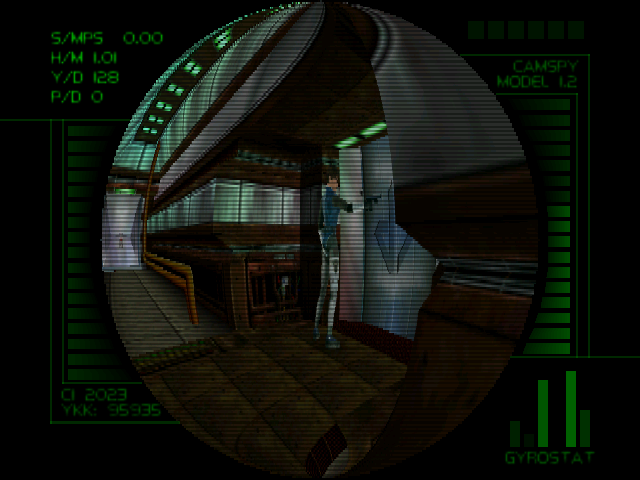 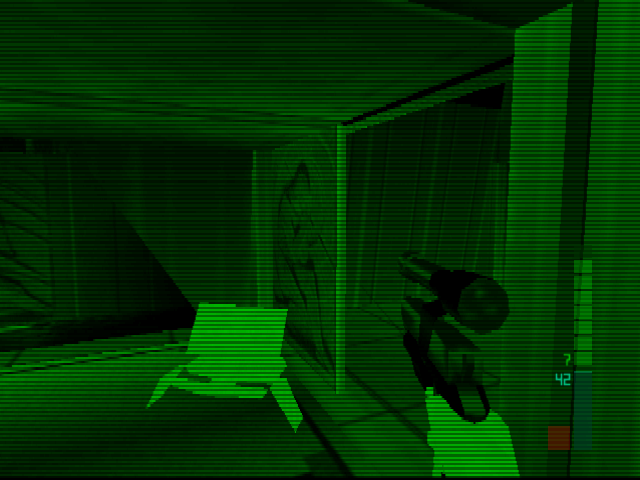 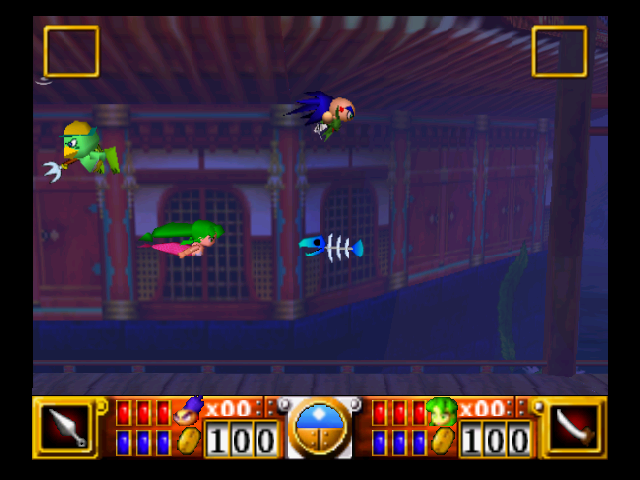 Background image also can be post-processed by CPU to get special effects, like blur: 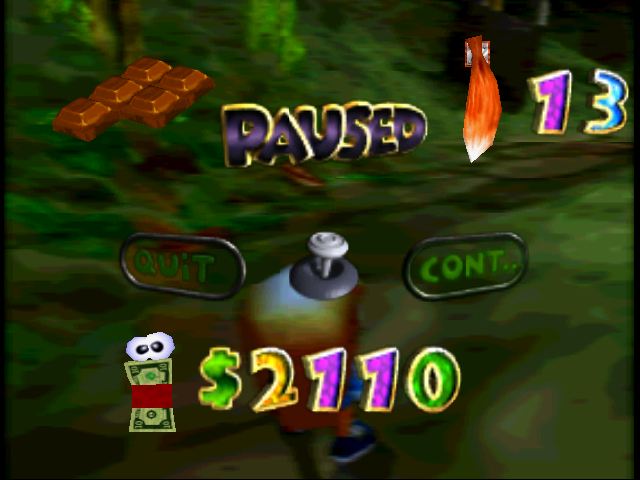 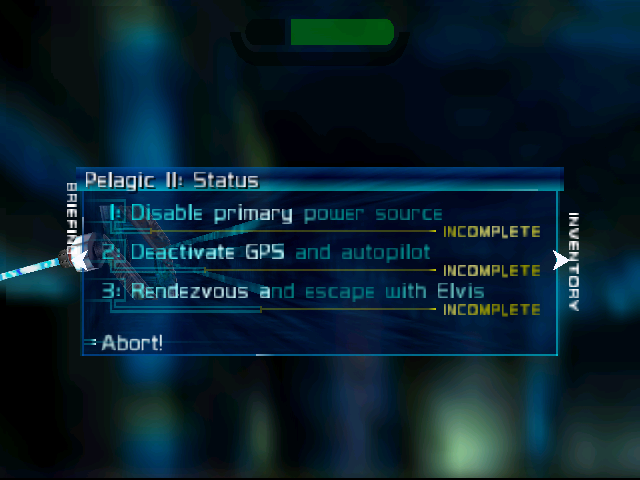 Some games use only part of the main buffer for special effects like TV monitors: 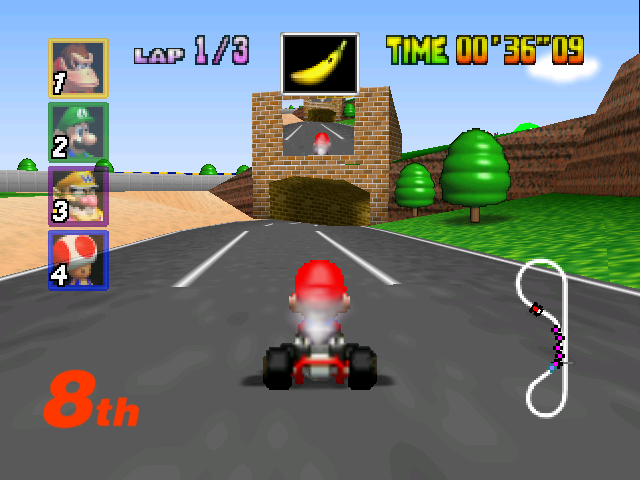 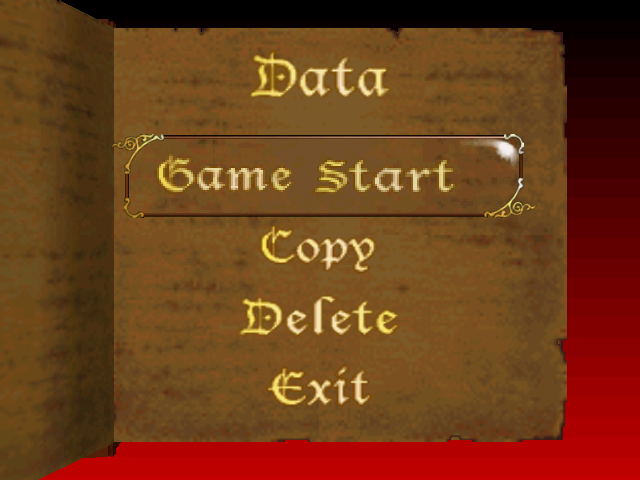 Primitive emulation of main frame buffer is quite simple: render frame, load frame buffer content from the video card, scale it down to the original resolution and copy to the proper place in RDRAM. Since textures are loaded from RDRAM, it will work.


Graphics usually processed by RCP co-processor. However, since CPU and the co-processor share the same main memory, CPU can directly write an image to memory and pass it to Video Interface, thus bypassing RCP. Usually such images are static company or game logos at the start of the games: 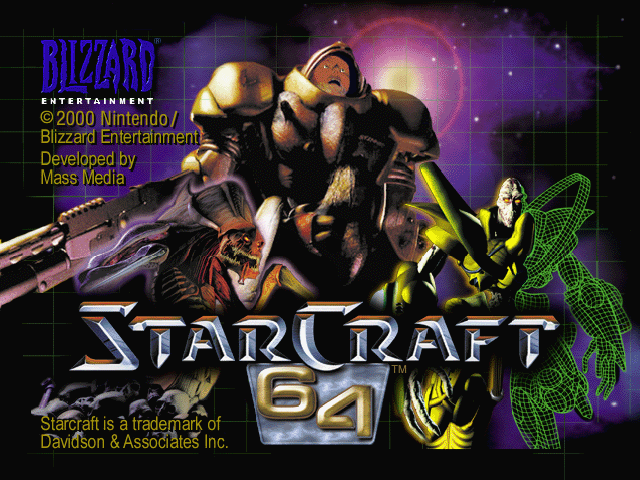 But they can be dynamic as well and even video can be shown this way: 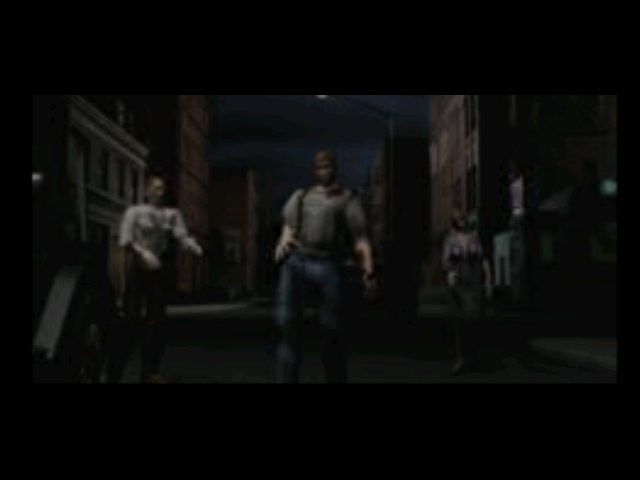 It is not hard to read an image from RDRAM and render it on screen. The problem is that graphics plugin implements RCP and when CPU bypasses RCP it bypasses the plugin as well. That is plugin does not know when it must stop waiting for display list and switch to RDRAM reads.


Besides main "normal" frame buffers arbitrary number of auxiliary ones can be allocated. Auxiliary buffer is not intended to be shown on TV screen; it is never passed to Video Interface and is used only as texture in main frame buffer. It can be of any size and any texture format. Auxiliary buffers used in many games for variety of effects. Some games render 3D models in auxiliary buffer and then use them as texture because manipulations with 2D object is much easier: it has only 4 vertices. Examples:
Link in pause screen, Zelda OOT 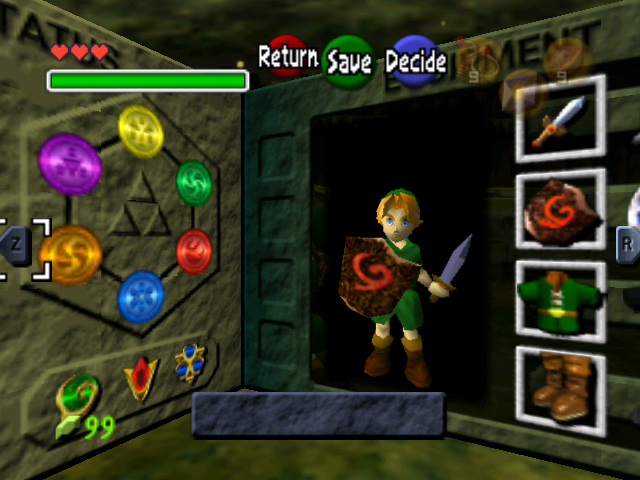 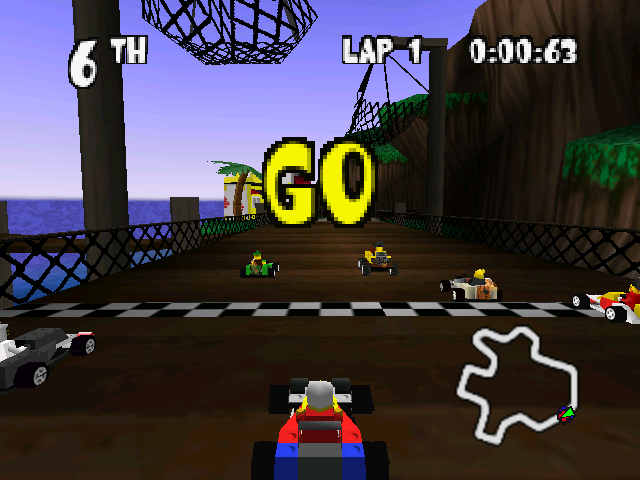 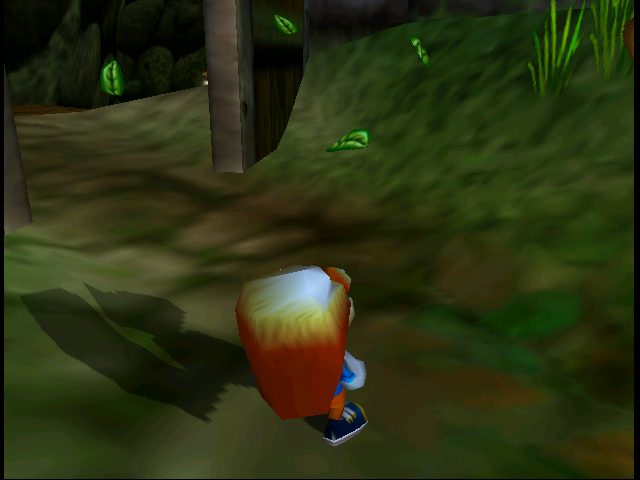 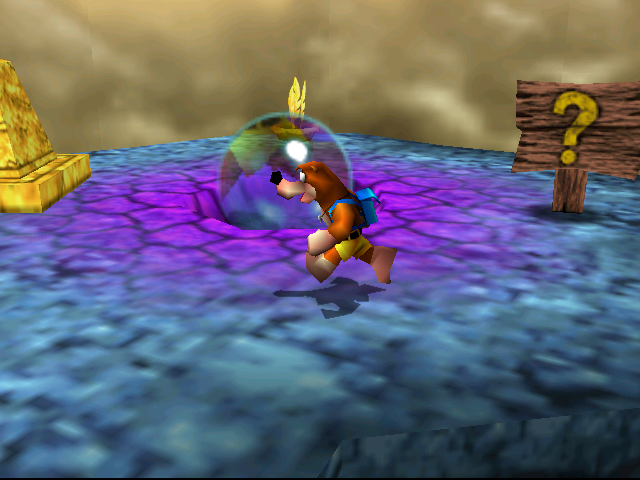 Complex combination: main frame buffer is used for infrared vision effect and large number of auxiliary buffers is used to create camouflage cloak which melds with the environment: 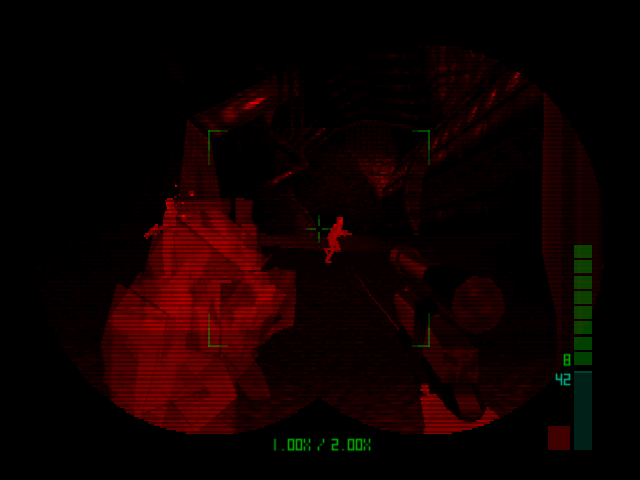 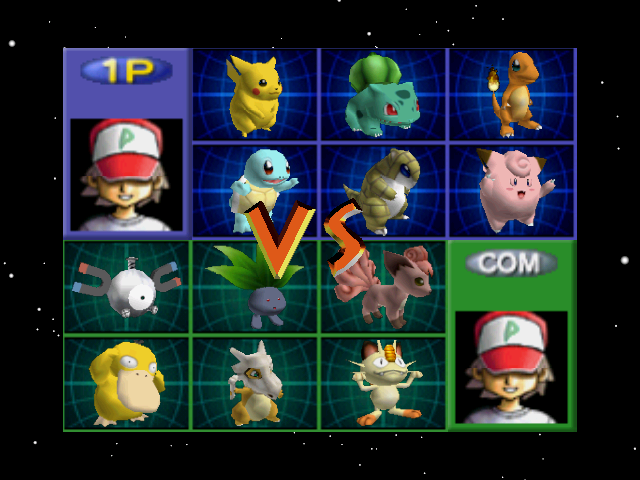 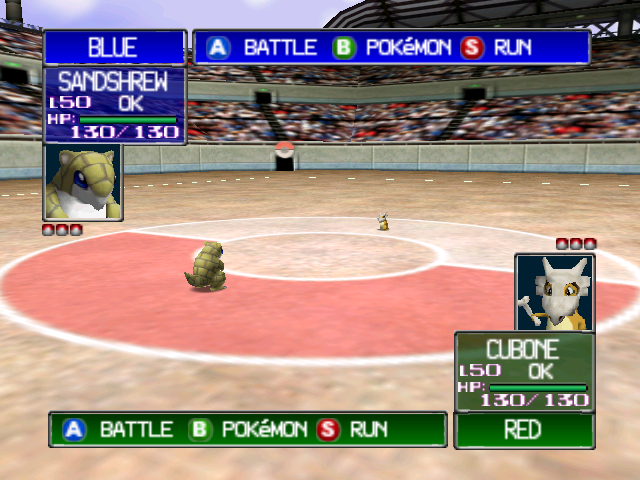 and many many more.

There are few cases, where auxiliary frame buffer is not used as texture after rendering, but is used as a base for creating another texture. The most creative example is "2D lighting" in Paper Mario. The game uses 2D sprites for characters, so normal dynamic shading is not applicable. However, in some areas parts of the sprite become highlighted when the character comes closer to a source of light: 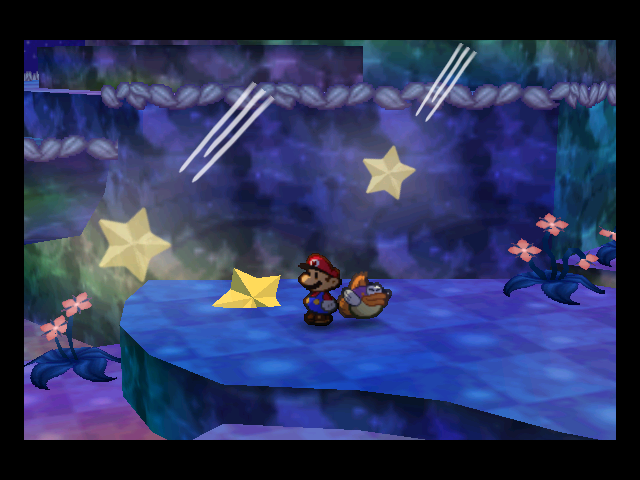 To do that trick the main color sprite is blended with another special sprite, which defines color intensity of the main sprite. That special sprite is color-indexed texture. Color of that texture is taken from its palette. Palette is loaded into texture memory along with the texture, and texture's texels are indices in the palette. Usually palettes are part of game resources and loaded from the ROM, but palette for "2D lighting" texture generated dynamically using auxiliary frame buffer. Special texture of palette size is blended with two constant colors and rendered into the auxiliary frame buffer and then this memory area is used as palette for intensity texture. This effect was not emulated for very long time, because developers could not understand that non trivial behavior of the program. Usual frame buffer emulation techniques can't help to emulate it.

Yoshi's Story uses 8bit auxiliary buffers to dynamically build color-indexed background textures, which then will be used for rendering the main scenes: 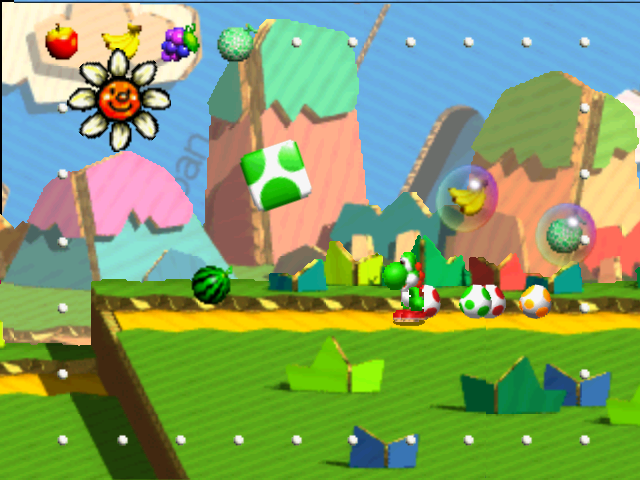 Score board in Mario Tennis is dynamically updatable texture. When text in the scoreboard need to be updated, the game creates auxiliary frame buffer at the address of the scoreboard texture and renders new text right into it. Then updated texture is applied to its object on the main scene.
Apropos of Mario Tennis, this game is the absolute champion in frame buffer usage. Let's take typical frame: 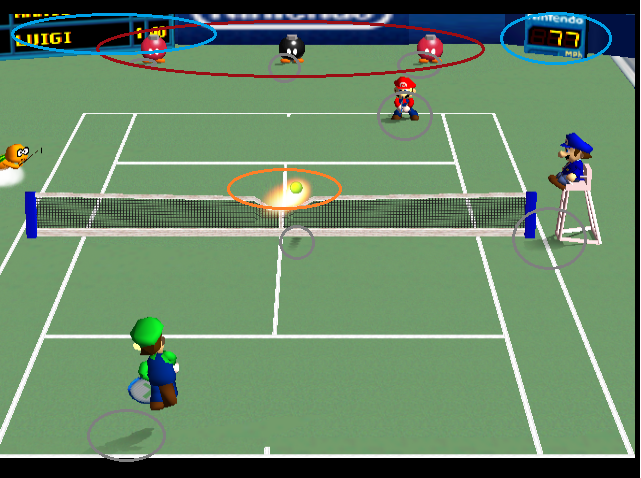 Dynamic shadows under each character and under the ball. Auxiliary frame buffers.
Linesmen sprites first rendered into auxiliary buffers, then used in main scene.
Ball hot trail with hot air effect. Complex effect. Several auxiliary buffers with the ball trail are blended with the main frame used as texture and the result is rendered back to the main frame. As the result the objects on screen are deformed under the ball and that looks like refraction of light in hot air.
Score board and speed gauge – dynamically updated textures.
And this is not all. There are also many interesting effects in replays, including motion blur. Now you see, why this game is so hard to emulate.

Special effects based on depth buffer


Depth buffer format differs from any texture formats and its content does not used for rendering. Thus, graphics plugins usually just use depth buffer of the video card and do not care about depth buffer area in the RDRAM. However, in some cases filling this area with correct values is essential. 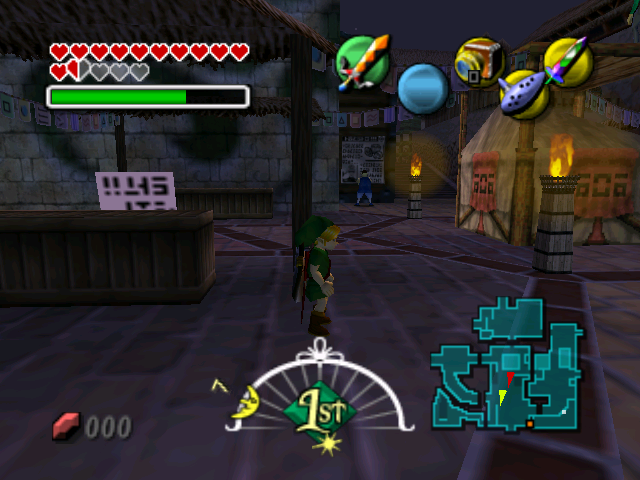 While depth buffer format is not texture, it can be treated as texture if necessary. Perfect Dark uses depth buffer as a color buffer to render into it a special “texture” containing information necessary for drawing coronas in this game: 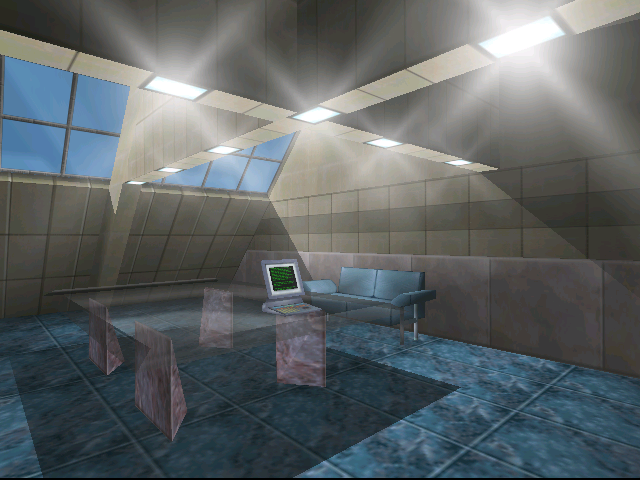 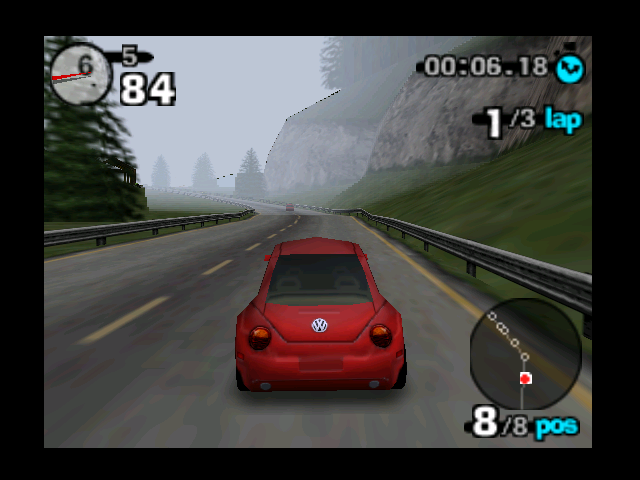 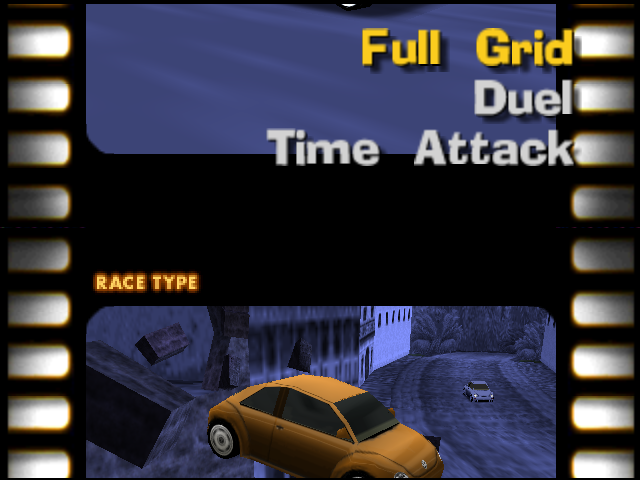 Two slides here are two already rendered frame buffers, placed one by one in the main memory. Video Interface just moves origin of the displayed buffer from one slide to another. No additional rendering, just smart work with the address in memory: 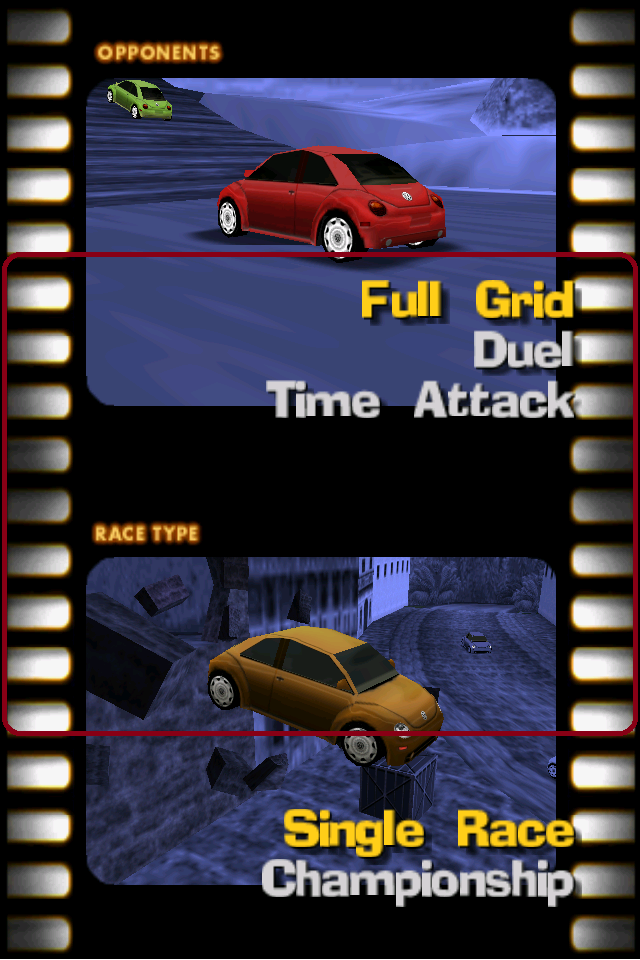 Today Linux port started to work. Base plugin was ported to Linux by blight years ago, so most of the works were already done. Some actualization required, since the code did not compiled and then did not linked. CMake helped me to attach necessary modules to the project and finally I managed to build it. The first successful start shown that my hardware lighting is incompatible with NVIDIA cards/drivers. I just turned it off. Then I found that the way I used to render frame buffer objects to screen does not work on Linux. Fixed. Found and fixed memory corruption problem, which I could not find on Windows. Now the port works, but some stuff does not work properly yet. 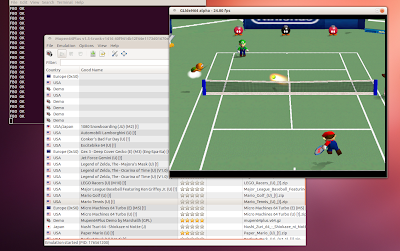