Let's continue our review of new GLideN64 release. Our next stop is


tab. It is the last stop for version 1.2 And it is very short stop overall. 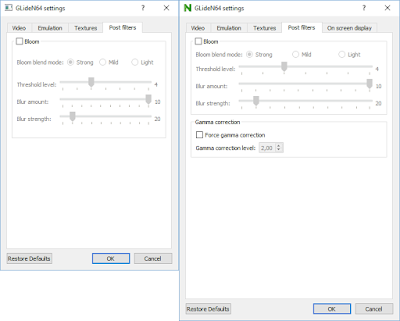 
It was planned to add many various shader based post filters for GLideN64. However, due to lack of resources only Bloom was implemented for version 1.2 You may read more about it in "Bloom post filter" article. Bloom filter not changed since 1.2

Version 1.2 has support for N64 gamma correction. However, that was done in a wrong way: as additional color transformation in fragment shader. From architectural point of view it means that gamma correction is performed by RDP. It is wrong because it is duty of N64 Video Interface. That wrong solution caused glitches in frame buffer emulation work, when previous gamma-corrected buffer blended with new one and picture quickly became overexposed. Thus that functionality was refactored, and gamma correction moved on its proper place as post-filter. I also added option to force gamma correction. You may use it if some game looks too dark for you. 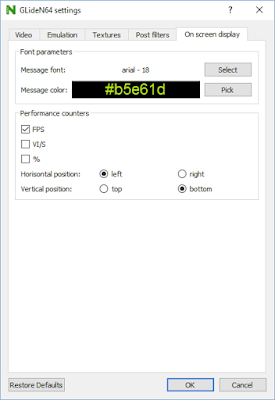 This new tab created for user-requested feature. Users asked me to implement on screen information about plugin's performance. On this tab you may select font and color of displayed message, which counters to show and where to show them. That is all.


Our excursion is over.
Thank you for your attention!